Tomorrow is my Tattoo appointment! 😀  Yippee!  I hope it goes well, it has been six years since I’ve been tattooed.  It’s such a little tattoo.  It probably won’t take long!  I’m excited.

I finally shelled out 109 bucks of my meager monthly income to get a 1TB external hard drive for storage of extra video files and other stuff.  It’s a super sweet little drive, tiny, but big!  I managed to free up 376 GB on my laptop and now I am able to work with a lot more video than before!  Makes me happy.  My computer was so unhappy before, and FCPX wasn’t letting me save anymore because there wasn’t enough room on the computer!  Which is a major drag when you are trying to finish up a video.

I’ve got some good news I can’t announce yet, but I can stoke you all up for some antici . . . . pation!

I’m feeling more able to fall in love with someone new.  I feel like I am getting out of the rut of unrequited loves that I was unfortunate enough to have.   I’m also appreciating this art of doing nothing yet letting things happen.  I feel like I am noticing opportunities more often, romantic and otherwise.

You know, even though I am always complaining about how there is no one in Saskatoon for me and I have to move away to find love, I think actually that I am wrong.  Over the last few years there have been a number of women I have attempted to court or ended up “hanging out” with and it involved maybe making out or sometimes just sexual tension and maybe it hasn’t worked out with anyone yet, but I have felt like I could love at least three of these odd friends.  Which maybe means love can appear anywhere.  I know there was at least one friend that I was really sure I was falling in love with until she suddenly had a boyfriend and that all fizzled out.

But you know, the other problem is that I was also mired in addiction for most of my time here in Saskatoon.  I mean, the sober thing is still relatively new.  It’s been over a year without booze, but out of the seven years I have been here, that’s not much time.  I wasn’t much of a potential girlfriend while I was using.  I was too interested in being high or drunk.  And I was sort of always hungry for substances, like I felt empty without them, which made me really boring.

I got my tattoo! 😀  I am so excited about it!  It hurt mostly in one little area, the head of the dolly I was getting tattooed on my arm.  The legs and body and arms were like, a milder pain.  It’s funny how tattoo pain changes depending where on your body it is being done.  It’s on the inside of my arm too, which is sort of new for me, except for the armbands I have.  Anyway, here is a pic! 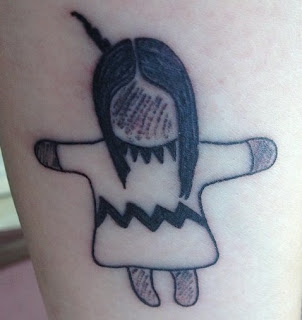 It’s from two series of drawings my Mom did, “Misuse Is Abuse” and “Living-Post-OKA-Kind-Of-Woman.”  She had this little dolly figure who was based off a doll Sky and I had when we were kids.

I wonder what ever happened to the original doll?

Anyway, my tattoo artist was super excited to be doing it and she got the sketchy aspects of it really well.  It’s very faithful to the original, which makes me happy.  It’s sort of a tribute to my Mom, without being a tattoo that says “Mom.”  Mum is really happy with it, we keep looking at it and saying CUTE!  It’s nice to know I will carry a piece of my mom’s art with me everywhere I go.

I’m really tired, and I have been out all night.  It’s almost four am!  OMG!  And I have to show the basement suite tomorrow between 1 and 3!  Cripes!  The pups are all asleep.  I envy them, they never toss and turn, they just lie down and that’s that, they are out!