I haven’t posted in a while and there was one major change in our home life.  Arthur the Golden Retriever was euthanized last Saturday.  The day before he didn’t want to eat, he was throwing up even though he had next to nothing in his stomach and he was having a hard time getting up.  We took him to the vet and they kept him for a few hours and did some tests.  Then they sent him home and he wasn’t allowed to eat the rest of the day.  The next morning was no better, and he was eleven so Mum called the vet and made arrangements for him to be euthanized.

I went with him and Mum.  He was given several sedatives that made him super sleepy and then one giant needle.  He passed away very peacefully, breathing out one last big sigh and kicking his back leg out to get more comfortable.  And then he was gone.

I cried.  I cried a lot.  I would get so mad at him but all in all he was a good dog, and sweet, and now he is no more.  I miss him.  Since then we have been adjusting, Hermione cried when he left for half an hour.  And then she was a little unsettled for a few days.  Now she is getting used to it just being her and Mister.  I’m gonna feel bad when I take Mister away in the fall.  She’ll have no one.  Mum made me promise not to let her get another dog for a year.  She’s worried she will make a poor decision if she gets one too soon.  I think she should get another dachshund, or a corgi, something Hermione’s size that she can play with, in a year.

We’ve discovered we can leave food on the counters again.  It’s been wild, leaving butter bowls on the counter and no one stealing them.  But there is also no one big enough to lick out the pots, or intimidating enough for us to leave the doors unlocked.  So things have changed.  No one eats our snotty kleenexes anymore either.

So I have to talk about him, because he was a big part of our lives.  And I will end this part of the blog with a pic of him. 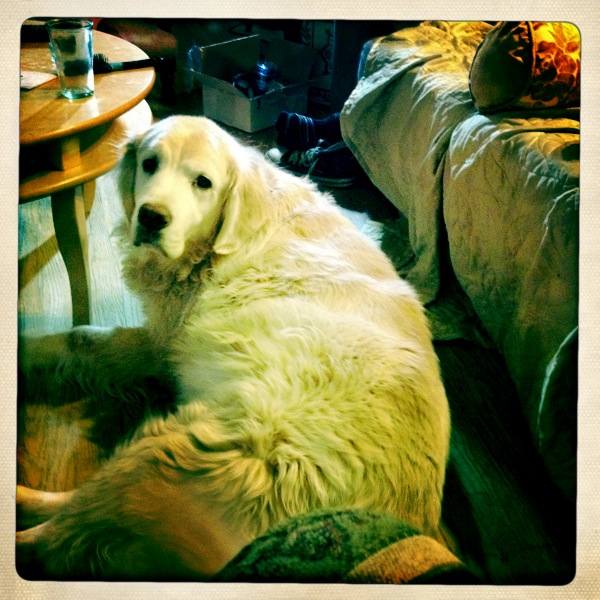 I’ve been going on Tumblr a lot lately, you can find me there at thirzac.tumblr.com.  I mostly reblog things I find interesting, but some of it is kewl so maybe you want to take a peek.

Fitofpique.tumblr was taken.  I tried!

I made sugar cookies on Friday with Shavonne.  It took a long time.  For some reason every time my Mom walked into the kitchen, I’d just be sitting there doing nothing and Shavonne would be busy working, and she thought I was just being a lazy bones but really I was busy!  Just not at the times she walked in, for whatever reason.  We made all kinds of cookies, wreaths, deer, santa, lights, snowmen, angels, on and on!  And then we made butter icing in four different colours and used all these sprinkles and made pretty cute cookies.  They were also really yummy cookies.  All of them have been eaten.  They didn’t last long!  I have half the dough in the freezer so I can make more!

I’m busy with my grad application still.  I don’t know if I should concentrate on writing a new paper or if I should just use an already written one.  This evening I went on a desperate search and found all my files from my first iMac I used in my undergrad on a CD.  I tried to open it in my laptop, but it kept getting spit out.  I tried it on Mum’s computer and it worked.  I copied them all and then looked through the various folders.  It was arranged very neatly, not like my files now, I could learn something from that.  Anyway, I found an old paper about A Streetcar Named Desire which I wrote in my third or fourth year but was from a 100 class.  I’m not sure it’s up to snuff.  I got a really good mark on it, but it is from a 100 class.  Soooooo, hmm.  I’m getting Mom to read it.  If I can concentrate on my other work I need to do for this grad application, that would be the best.  I’m worried I’m spending too much time trying to write an academic paper, and that the rest of my application is lacking.  I have two reference letter writers chosen, I just need one more.  And I have to work on my Statement of Intent more.  And get together my portfolio.  AND write 500 words on how my disability has impacted my grades.  So there is still a lot to be done.

Anyway, I am really tired, so I am going to go to sleep.  OH!  But before I do, I have to tell you about the spirits who visited me in my dreams last night.

I was in a divey bar and Jasmine walked in!  I asked her what it was like to be dead, and she said people talk to you so you break open.  I’m not sure what that means, but it’s rife with possibilities!  Then Arthur walked by on his hind legs, wearing glasses, a fedora, and a trenchcoat.  Strangeness!