Today I imported two video files into iMovie (a really old copy) and made copies of my videos on two tiny tapes.  I also put away my hard drive and gathered my contracts and info sheets for my videos and found a box to ship it all away in.  I am now burning the required dvds.  Woot!  I will have my videos in distribution, thank god!

I quit smoking today so it would be another quit on an 18th day of the month.  November 18th, I quit smoking.  I am doing the patch and having the odd lozenge when I get a craving. 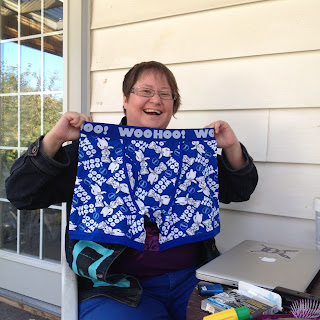 This is me before the snow came, with some new sexy underwear I purchased.  Yes, that is the Pilsbury Doughboy.  I was hoping I could wear it on a date, but so far I’ve had no need.  I’m just wearing it when I feel like laughing every time I go to the bathroom.

I’m spending money to make money.  It’s kind of a drag.  I wish I could make money without having to spend anything.  I had to rent equipment for a shoot this weekend, and I had to buy a hard drive for my videos to send to Toronto.  I’m looking forward to when money starts rolling in again.

I’ve gotten used to feeling hopelessly single.  I feel like maybe this isn’t the best feeling.  I’m worried I won’t find a girlfriend until I move away to Toronto.

More confessions, I found an ex by googling her.  Google is not my friend.  I shouldn’t even have put her name in a search engine, I should have left well enough alone.  I was perfectly content not speaking to her.  Now I’ve seen her clothed breasts again and that cute face and I’m like “Oh shit!  Not this again!”  I can’t be hung up on this woman forever.  No more!

I’ve started a Tumblr, but mostly just to reblog things I find funny or smart or sexy.  I’m maintaining this blog still as my all original writings of my life.  I feel like I have invested too much into it to let it go.

I’ve had a sore throat for two days.  I’m terrified of the big C word being involved.  It’s probably a cold that I am fighting off, but it’s still terrifying me.  I’ve got one friend with a tumor in his lung and another friend who has something abnormal going on in his esophagus, and it has really kicked me in the pants about this whole mortality thing.  I know one day I will die, I just don’t want it to be horribly premature.  I feel like my struggles to stay alive during suicidal depressions which have been really terrible shouldn’t be meaningless if I end up dying of cancer early in my life.  It’s really made me happy I quit smoking, for what I hope is the final time.

I’m getting better at getting work done.  I still have some shit I have to do though, I am going to be busy this next while.  I am going to Regina this coming weekend for a show, that should be nice.  I always feel so weird watching my videos in the audience, because I totally pay attention to the audience reactions.  And it makes me nervous.

I don’t have any library fines!  I have to go get a new card because my account expired, but hurrah hurrah!  No fines!  I was terrified I owed my soul to the library.  I’m relieved that I can now take out books and stuff without using my mom’s card.

I am behind in my readings.  I need to get caught up.  I am also applying for CSR jobs that pay good money.  I went for a keyboarding test (did I already mention this?) and scored 51 and 54 wpm.  With a 99 and 100 percent accuracy rate respectively.  Which puts me in the running for those jobs.  I hope I get an interview.

Although I do have so much work to do, I wouldn’t be horribly sad if I remained jobless until January 16th when my grad application is due.  That’s probably a bad thing to say.  I just need time to read and write and shtuff!

I didn’t cook anything all weekend.  I still want to make bread!  Maybe Tuesday I will!