I read that Mayan priests are going to be cleansing a site that Bush is visiting, AFTER he leaves. They say not cleansing it of the evil spirits associated with Bush would be disrespectful to their ancestors. I’ve often wondered what spiritual people are doing about this issue.

And now the Iraq exit strategy is to invade Iran. Oh fucking hell. As if not enough trouble was caused. Karl Rove is now saying that Bush’s legacy is Preemptive warfare, and that he sees all future Presidents following this ideology. Help us now!

Yes, the world considers America to be the 4th Reich okay? Let’s just get that out of the way right now. It’s a fascist police state, and if you don’t believe me here’s a link to an AWESOME breakdown of Fascist governments and the corresponding news stories from the States. In fact, at one job I had David Suzuki came to speak and told us in 20 years Bush will be on trial for war crimes. It’s true it’s true. Why did it have to come to this? I don’t know. I saw this all coming way way back when the towers fell and I remembered the Reichstag. LOTS of people did, I wasn’t the only one, at all. 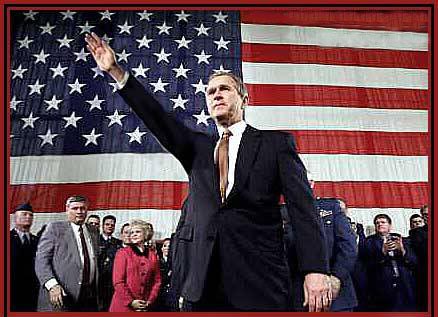