I got tattooed yesterday!  It’s the cherry blossoms I have been wanting forever.  Here are some pics of them: 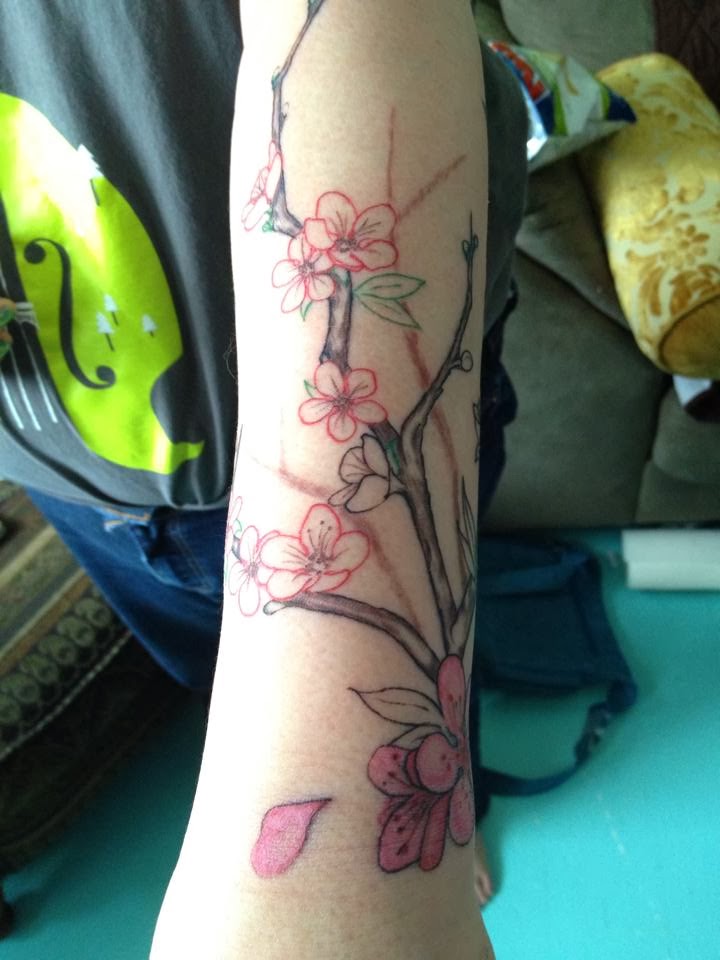 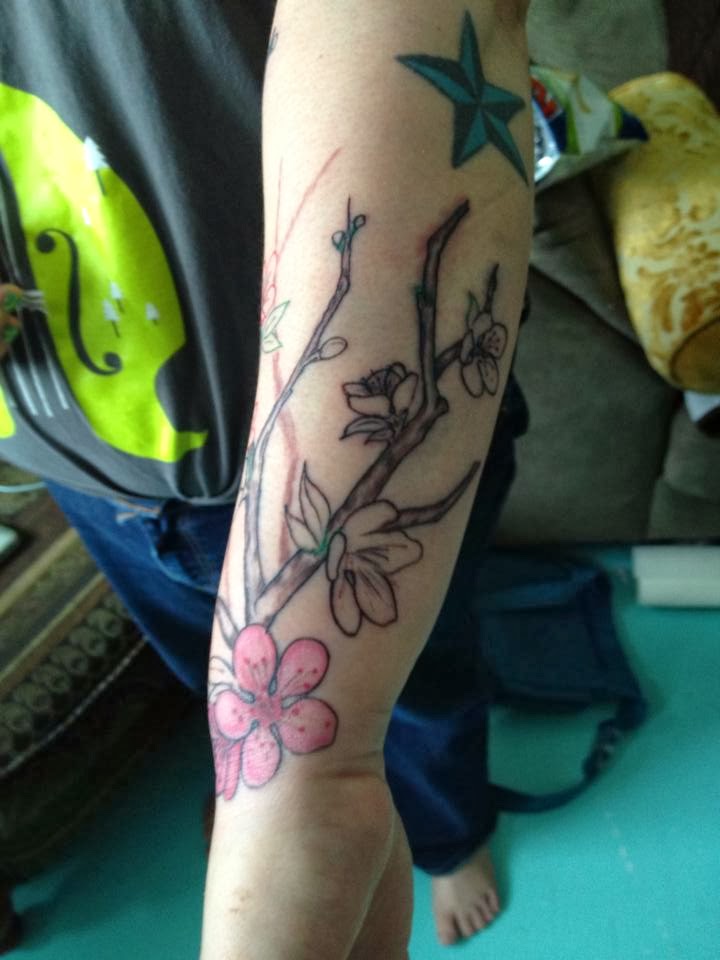 I have learned I can do about 2.5 hours of tattooing before reaching my pain threshold and needing to stop.  So that’s how much work this was, plus one hour of drawing the branches on me and placing the blossoms, buds, and leaves.  There’s a lot more colour to put in, including some blue on the outside.  I’m really happy with it so far.  In a month after this heals I am going back to get the rest!

I am getting this tattoo because cherry blossoms have a special significance in my life.  When I lived in Vancouver for nearly a decade I would get depressed every winter because of the gloomy grey skies and lack of sun.  Like, suicidally depressed.  And I always promised myself I wouldn’t do anything drastic until I saw the cherry blossoms in spring.  And it worked, because by the time the cherry blossoms came out, the sun would be back and my mood would have lifted.  For a while I thought about getting magnolias on my arm, but even though those were nice too, it was really the cherry blossoms that I liked.  There were so many of them.

I feel super tattooed now that I have close to a half sleeve on my left arm.  I have more tattoos in mind.  I want to get Little Mister’s paw pads tattooed on me somewhere.  Not sure where yet.  I might save my heart area for my future wife.  I’m also contemplating a tattoo for my grandma.  I’m torn between two mittens with a string on them or a cinnamon bun.  OR two mittens with a string HOLDING a cinnamon bun, which is what someone suggested.  It would be super cute!  But that’s for the future.  And I want to put a thunderstorm with a thunderbird on the other side of my right arm with the dragon tattoo.  Because in Cree mythology, Thunderbirds and Snakes are enemies, and my dragon is very snakey.  So that conflict might make my arm make more sense in the Cree way.

Ha ha, Cree Way is the name of the rez gas station here in Saskatoon.  There are actually a few rez gas stations, there is also Firecreek and English River’s station in Grasswood.

OHHHHHH!  There is one other tattoo I’ve wanted for a while that is super funny.  I want an exploding cherry bomb on my ass cheek.  Like, a really cartoony one.  It’s just something I have thought about for a long time that makes me smile.  I wouldn’t be able to see it, but that’s okay, my future lovers will have something to laugh about.

It’s Saturday night and I am at home!  Today Mom and I went to the matinee of American Hustle AND later we went to the Casino! I won 42 bucks! 😀 I was betting 20 lines at 2 cents a bet!  On Lucky Meerkats.  I was on a real streak, I got three of those little guys with the capes and two wilds so I won 20 bucks, and then I won 20 bucks on a bonus! 😀

I’m pretty alright otherwise.  I have no local crushes.  Only celebrities and old far away friends.  Oh, and I guess some standby crushes I’ve just carted around for so long that I have nearly forgotten about them.  I need to get to some major queer event that involves international homos.  And have a fling.  Or get a sexy penpal.  Or something.  OR find someone who wants to move to Canada.  Pshaw, there probably is someone cute in Canada I could date, if I really went out looking.