So Toronto was super fun!  I learned how to pitch and I think I did a pretty good job, even though I didn’t actually win in the end.  I saw some really good films, stand outs include Rhymes for Young Ghouls and a short from Australia called Abalone.  But there were more good ones than just those two.

I saw a lot of friends I hadn’t seen in years, including Louis, Ariel, and Robin!  It was so nice to spend time with them.  Robin and I went out on walking adventures around Toronto and she showed me some neat places including a farm and OCAD which looks like a box suspended on pencil crayons.  I also spent my last day with my cousin Theresa and her dogs Peanut and Porkchop, and we walked around Ryerson where I am thinking of applying for an MA in Media Production.

Which reminds me, I had the worst thing happen to me while I was in Toronto which was that I got a horrible head cold and turned into a mucusy coughy mess.  Travelling with an illness is terrible.  I think I am finally over it, but for at least half of my trip I was feeling generally gross.  I may have given it to Robin too.  Actually I noticed a LOT of people on my FB were battling colds as well, so who knows where it started.  I could have gotten it in Saskatoon and brought it out east.

I also had a screening last tuesday with the 2 Spirit Skillshare and it was really nice, they asked some awesome questions and I was mostly able to give good answers.

My screening at ImagineNATIVE also went well, people really responded and when I was walking around after people kept stopping me to talk about it.

What else?  Hmmm.  Funny little crushes popped up (okay just one) and it was a little awkward but okay and I think just reiterates that this person is pretty awesome to have in my life as a friend.  So that was nice.

I really missed Little Mister.  He is a grounding presence in my life so it always feels a little weird when he and I aren’t together.  And he is gonna be a geriatric dog next year, so I have to start getting used to the idea that he won’t always be around.  BUT he is still a fairly rough and tumble sturdy little guy in super good health except for his teeth, so I think he’s got a few more years in him yet.

In sadder news, Mom took Baby Dora the Corgi back to the breeder because Dora and Hermione, Mom’s wiener dog, weren’t getting along and they were getting into very violent fights and Mom was worried Hermione would get hurt.  So no more Dora.  Now Mom is waiting a while and then getting another mini dachshund, who won’t get bigger than Hermione.  I hope Dora finds a good home, and I miss her already.  She was a sweetie.

I have tried to write this post three times and I always get too tired and end up going to sleep!  So, basically, what is going on is this: I got into the pitch competition at ImagineNATIVE.  I have to make a one minute trailer and a four minute pitch.  Then I fly to Toronto on Tuesday, get settled.  On Wednesday I go to a six hour pitching workshop and then that night meet up with friends for the Lesbian Haunted House thing.  Then on Thursday is my screening, and Friday is the day I pitch!  I have Saturday off and then Sunday I am going to the awards thingy and find out if I win anything!  IF I do win the pitch competition I get $5000 from APTN, a $2000 certificate from William F. White, a $500 certificate from Technicolor Toronto, a contact at the NFB to talk to about my project, and an ImagineNATIVE backed Kickstarter page to raise more money for my film.  Big smiley face here!  And only four projects got picked for the Drama pitch competition (there is also a documentary pitch competition) so just going by the odds I have a one in four chance of getting the prize, which is pretty decent!

I have to do some taping tomorrow and some editing and then I will get my trailer done.  My pitch thus far is in maybe draft number two.  I’m gonna work on it a bit more.  I read a book about pitching written by a Brit and I have been reading internet articles about it too.

What else?  Oh, because I am showing a film at ImagineNATIVE I could also possibly win an award for best experimental film.  I hope hope hope I do because then I could get my dog’s teeth done, he needs them cleaned before they get too far gone.

I’m really tired now, so I should go to bed.  I will also say that I have the chance to see a bunch of friends in Toronto who I haven’t seen in ages, and I am super excited about that!  Robin!  Louis!  Margaret!  Maybe Shavonne!  We’ll see!  I’m so stoked!

So I forgot to mention, I went to a demonstration last week at Rock of Ages Church against a speaker they had named Wilna Van Beek who was a lesbian who has decided to live a celibate life so that she could be a good Christian and not go to hell.  Basically I think that being a homo and being celibate ON PURPOSE so that when you die some imaginary judgemental god won’t send you to the fiery place is kind of a long shot.  I mean, what if there is no God and no Jesus and no reason to live your life without human affection?  Whatever, basically I just think Christians telling homos we can be okay if we give up our chances at loving happiness is sick.

So my task was to come up with a genius sign!  I thought long and hard about it.  I finally came up with one the night before the demo. 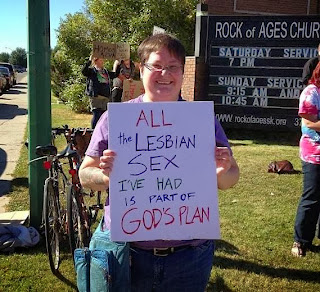 For those who can’t see the picture, it says All the Lesbian Sex I’ve Had is part of God’s Plan.

It makes me laugh!

Anyway, I have never made a pro gay sign before, because I just never needed to.  It was fun!  I searched for a good one online, but they were all related to marriage, so they didn’t seem to fit!

I finally bought my plane ticket for Toronto!  Now it’s real!  Now I’m really gonna be there!  I’m stoked!  Tomorrow I will find out about something, so I might have more stuff to do while I am there, fingers crossed!

My Mom won the Lieutenant Governor’s Art Award for Saskatchewan Artist last week!  I’m proud of her.  She was stunned when she won!  Now we have a bronze Joe Fafard in the living room!  Exclamation Marks everywhere!!!

I got my SAB grant in today!  It’s due tomorrow, so I am one day ahead of the deadline!  I also have to do the travel grant for Toronto’s events, I can get it in tomorrow, they weren’t taking them until after today.  It’s a fairly simple grant, so I should be okay.

What else?  Little Mister looks good in his Halloween costume!  This year he is going to be a prisoner!  He has a little stripey shirt that says Guilty on it!  I’ll post pics on Halloween.

I have no costume yet.  Maybe I should be a warden!