I want it all! 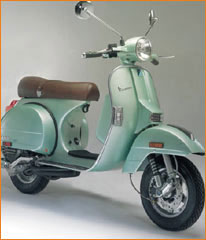 I’ve decided I want a Vespa. This Vespa. I still don’t have a license, and I know I’d have to get a motorcyclist license too, but damn it looks so fuckin’ SEXY!!! I tried to go win this exact model the other day but you had to have a special C95 letter saying you could have one of the 95 keys for the key off. Sad me. I will have to get Vespa wealthy by honest means.

I’m also cursing being in Saskatoon at the moment because I’m desperately seeking the self-titled album by HK119 ever since I heard “Friend for Dinner” on the One Little Indian podcast. PLUS come on, how can you not want to own a cd by a woman who looks like THIS:

But by far the SEXIEST fuckin’ thing I want is THIS:

It’s not just a PowerMate USB Volume Control, you can also assign it to work as your Jog Shuttle controller for video editing. Coming from an analog background, I have dearly missed Jog – Shuttle controllers. There’s just something so satisfying about being able to move images forward with a turn of the wrist. Mmm, Jog Shuttle. Lovely stuff that is. It’s only $44 bucks, so I can probably afford it.